Q&A with Lyn Garling of Over the Moon Farm 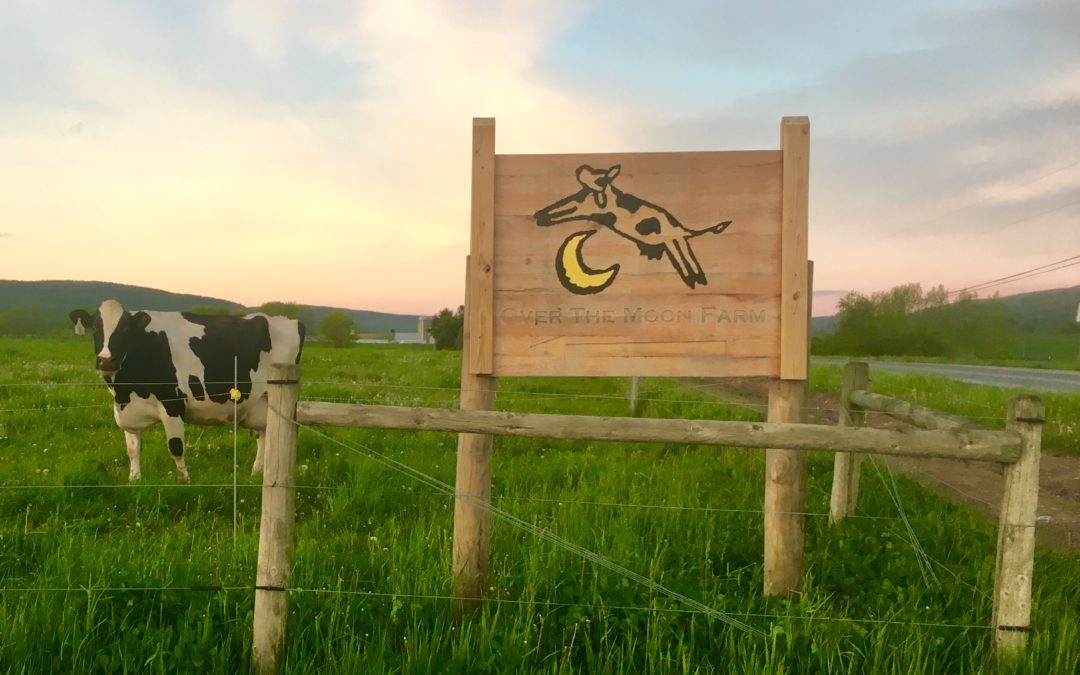 It took Lyn Garling many years to settle in one place, but once she did, she bought the farm. Owner and operator of Over the Moon Farm in Rebersburg, Garling’s life circled around agriculture in various ways — and in a variety of places — before a job at Penn State brought her to Centre County more than 20 years ago.

“I kept gravitating towards gardens and farms and horses and anything that had to do with that kind of lifestyle,” she says. “I always gravitated to it but I had no direct access.”

She changed that in 1998 when she bought and started Over the Moon, growing it — along with partner Patty Neiner — into the highly respected local meat purveyor, selling chicken, turkey and pork, including 13 different kinds of sausage, it is today. And she recognizes it’s a two-way street.

“We acknowledge that there is a quality relationship there between the people that want our food and appreciate how we farm and how that enables us to do this work.  It’s a symbiotic relationship.”

We’ve paired up with Garling and Over the Moon to present El Gringo en Fuego, a pop-up dinner by Chef Ben Stanley that will include a whole roasted Over the Moon pig and fire-cooked chicken raised on the farm. Tickets are still available! We sat down with the farmer to talk animals, gender gaps and, of course, bacon. 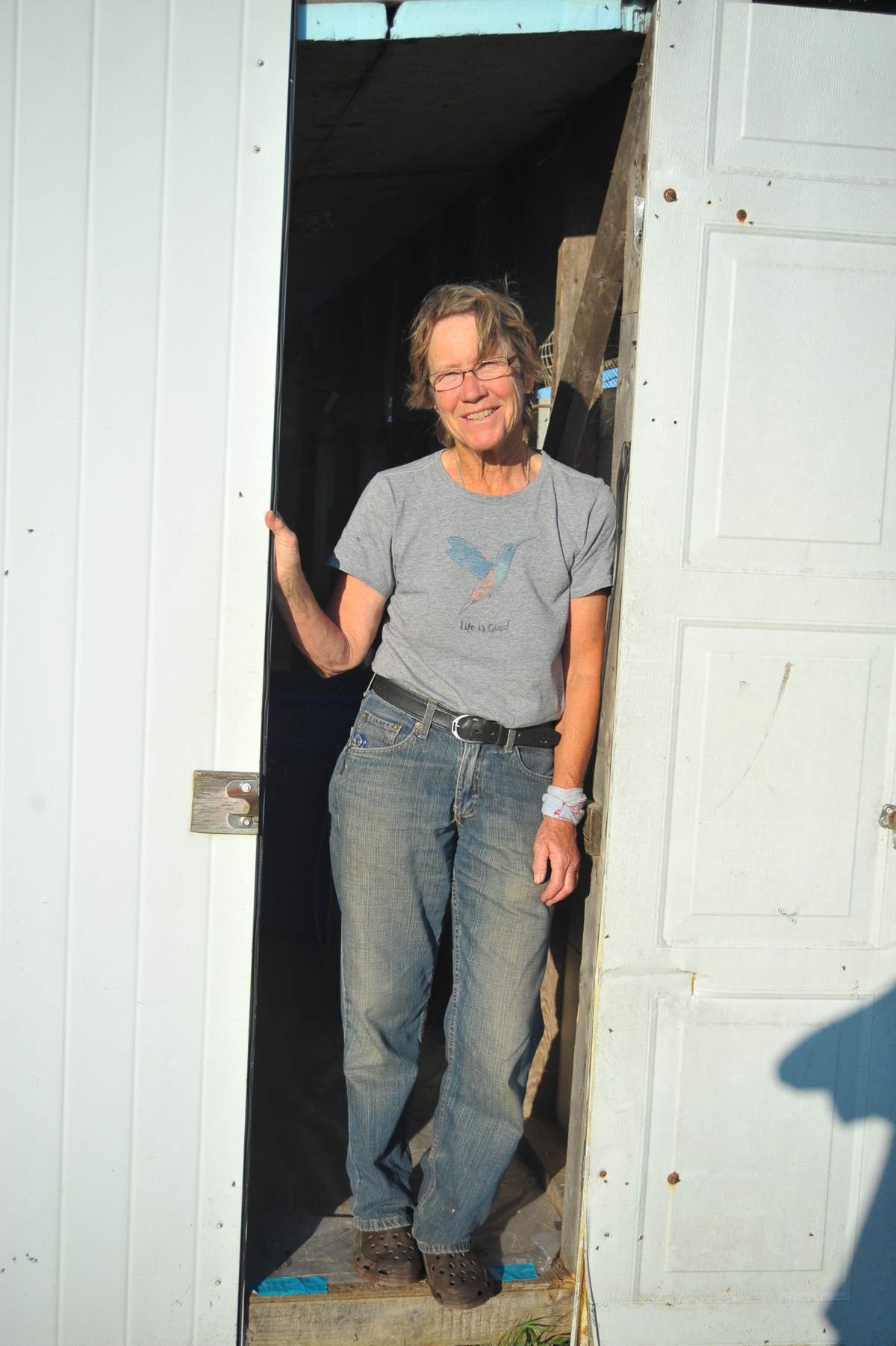 How did you get started in farming?

I guess my first real experience that I carried with me was when I was an undergraduate student at Colorado State University in Fort Collins. At the time I had this boyfriend — we needed a place to live and the woman I was working with at the lab said, ‘I know a guy on a dairy farm and he could really use your boyfriend’s help.’ What was funny was, that’s the way it started out, but the way it ended up was that I was the one who really took to the farming. We were milking 80 cows on 800 acres and making hay and all that goes along with dairying. I was just like a fish to water with it. And so when the relationship broke up, the owners asked me to stay and him to leave. The interesting thing about that is, being a young, inexperienced woman, I never would have had the opportunity to even be on that dairy if it wasn’t for the the boyfriend.

What is your connection with Pennsylvania?

I have a master’s in entomology, and have spent the last 20 years working at Penn State in the Integrated Pest Management Program, doing a lot of adult education. I was out in the world where people encounter pests — which is basically everywhere — from schools and homes to gardens to farms, and doing education around how to deal with pests in a more ecological way, not use as many pesticides and be more discriminating in their use and their choice.

But meanwhile I was attending field days of PASA (Pennsylvania Association for Sustainable Agriculture) and I did farm inspections for PCO (Pennsylvania Certified Organic). I got to see a lot of farms and I thought, ‘You know, compared to Colorado, you could have a small farm here and make a go of it because the water falls out of the sky.’ I practiced on a rented farm a little bit, did some grazing of beef and dairy heifers, started raising a few chickens just to see. Finally I thought, ‘You know what, you want to have a farm, you better just do it because you’re going to be 100, keel over and never have your farm.’ Besides, at 48, I was younger than the average age of American farmers!

Was it difficult getting into the traditionally male farming occupation?

I think one of the barriers for me was I moved my whole life, all the time trying to imagine where I was going to be and how it was going to be. Our family is from out west, Washington and Oregon. That’s high wheat country — beef cattle, sheep, people with horses moving cattle up into the mountains and back down. When I was a little kid, I thought, ‘Man, this is the greatest thing since sliced bread.’ I wanted to be that person. But I did not see any women who were ‘the farmer.’ It was always the male of the household who was identified as the farmer and the woman was ‘the wife’ and everything that went along with that culturally.

But also I think some of it has nothing to do with other people’s attitudes towards women. Some of it just has to do with what you learned and didn’t learn growing up. For example, I’m just not really about machines. I’m not uncomfortable around them really — I’m just not good at it. Whereas a young boy growing up in a rural environment where there’s a farm, they’re expected to help and learn these things.

Things like that, culturally or upbringing, make certain aspects of the farming more difficult to get into because it’s intimidating. I had to overcome certain things that I just didn’t feel confident about. Finally I realized, ‘Just make the mistakes and then you’ll know.’ 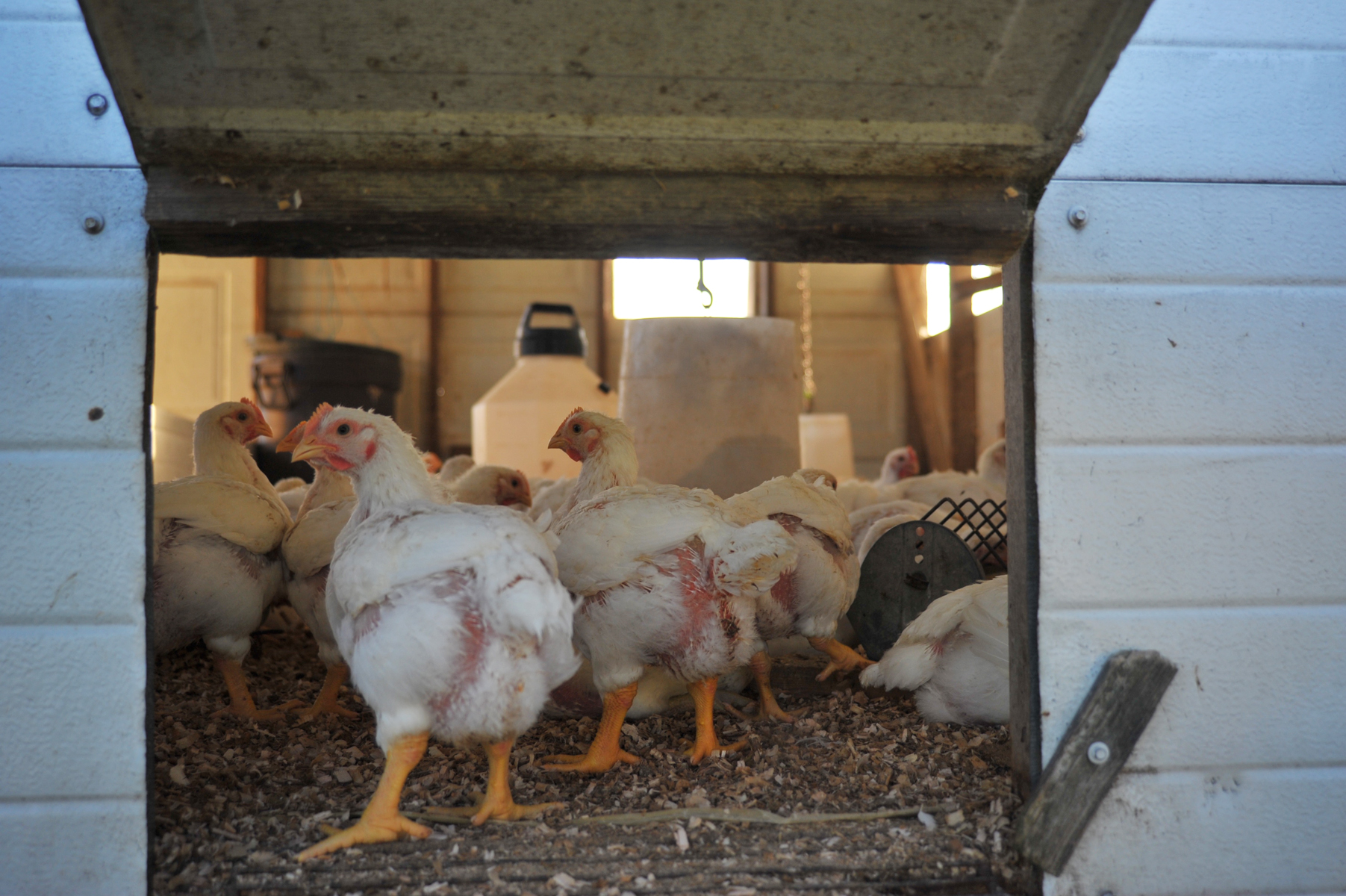 What do you wish local food consumers understood about farming?

People have different images of what a farm is. People who are interested in “natural” farming have some idea that because it’s natural and “working with nature” it’s somehow easier. I think that’s a little bit of a misconception. You don’t really work with nature. Nature does what it does, and you adapt. People see farming as a lifestyle, and it is. But the economics of it are really intense. You’re spending a lot of your time making sure that the systems work and the animals are safe and comfortable, have enough to eat. You work your tail off serving them, and the whole nature piece, you just react to it every day. Animals or vegetables, the biological world has consequences and those consequences are non-negotiable. You’re constantly in this vice grip of action-reaction and time.

When things are running smoothly, it’s great. But the other part about a farm is like a giant organism. And a farmer’s job description includes facilities manager, H.R. person, animal husbandry, plumbing, electric, landscape maintenance, machinery… It just goes on and on. You are the person that is responsible for all that stuff. For me I like it in a way because it’s a challenge — that’s the best thing about being your own boss. I’m producing a quality product to the standards that I want. But on a day-to-day basis it’s ridiculous.

What I like about it is that you’re really a self-actualized person. You are engaged at all levels. You have to be creative. You have to be frugal. You learn stuff all the time. It is challenging in a good way, but it can also be really exhausting. 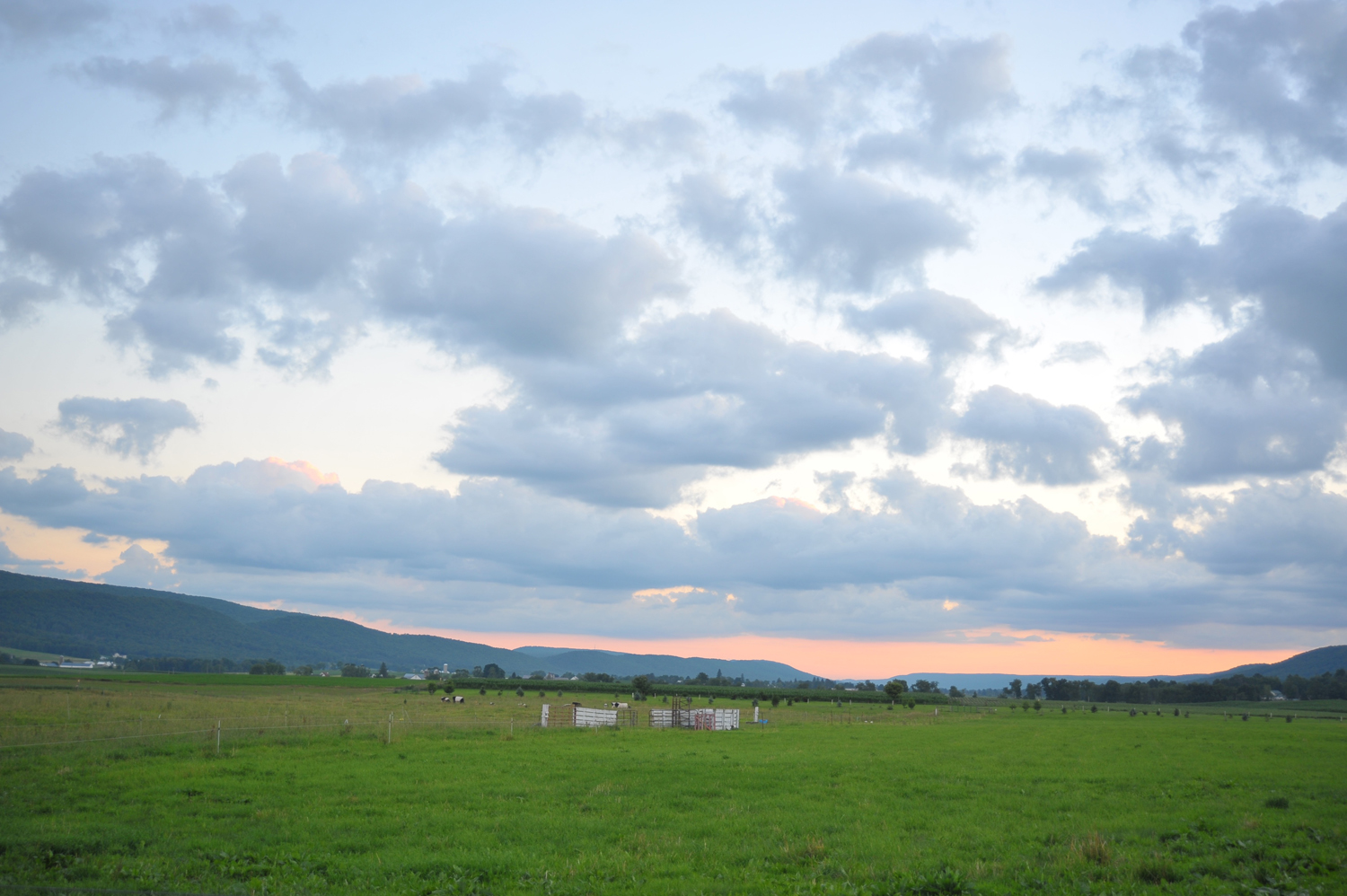 What’s your favorite midsummer meal — something that you want to eat right now?

A BLT. When tomatoes are on, there’s nothing better than a fresh tomato. And of course I shop at the farmer’s market too so I can get sourdough or whole grain bread. There’s nothing better. As far as I’m concerned, that’s all your food groups right there. And it’s fast. I come in from a long day, I ain’t cooking.

I’m a huge milk drinker. I get raw milk from Clover Creek Cheese Cellar. They sell at Boalsburg and North Atherton farmers markets, and I’m always like, “OK I don’t think I can make it until Saturday, give me half a gallon today and I’ll get a gallon on Saturday.” So that kind of sandwich with cold, grass-fed whole milk, mmm, baby. That’s my best meal.

One recipe people seem to like whenever I explain it to them (or they eat it!) is our smoked ham hock in a crock-pot with beans and greens. It’s not really a recipe because I don’t use recipes — I kind of wing it with whatever’s there. That’s what’s great about this recipe because it works no matter what. Start with a great stock — what I use for my background stock is what we call turkey soup fixins. It could be chicken broth — not just plain water. It makes it really rich.

Make sure you have plenty of onions. I like to sauté the onion and garlic separately in butter because that gives such a flavor. So put that in with the broth, then put the meat in — the smoked ham hock. Here I always add a little bit of something tomato. Not a lot — I don’t want the whole thing to taste like tomato. But there’s something about the acid in the tomato that brings out all the meat flavors. So it could be a tablespoon of tomato paste in the wintertime, or put in some tomatoes if it’s summer. And then I will add water so everything is just barely submerged and then cook it for a couple, three hours.

And then I start throwing in vegetables, with hard ones first and soft ones last. Toward the end is when I add whatever beans and greens I want (because for me, beans come out of a can). If I can get them, I really like to chop up collards, but whatever green you have, put in like 15 minutes from eating. It’s so good; it’s just to die for. I make huge batches and freeze it so we can eat it whenever. And I can make it while I’m doing a million other things, which is what I’m always doing. It’s not fussy, and it always works.

Use code OVERTHEMOON for 15% off tickets to El Gringo en Fuego at Over the Moon Farm.