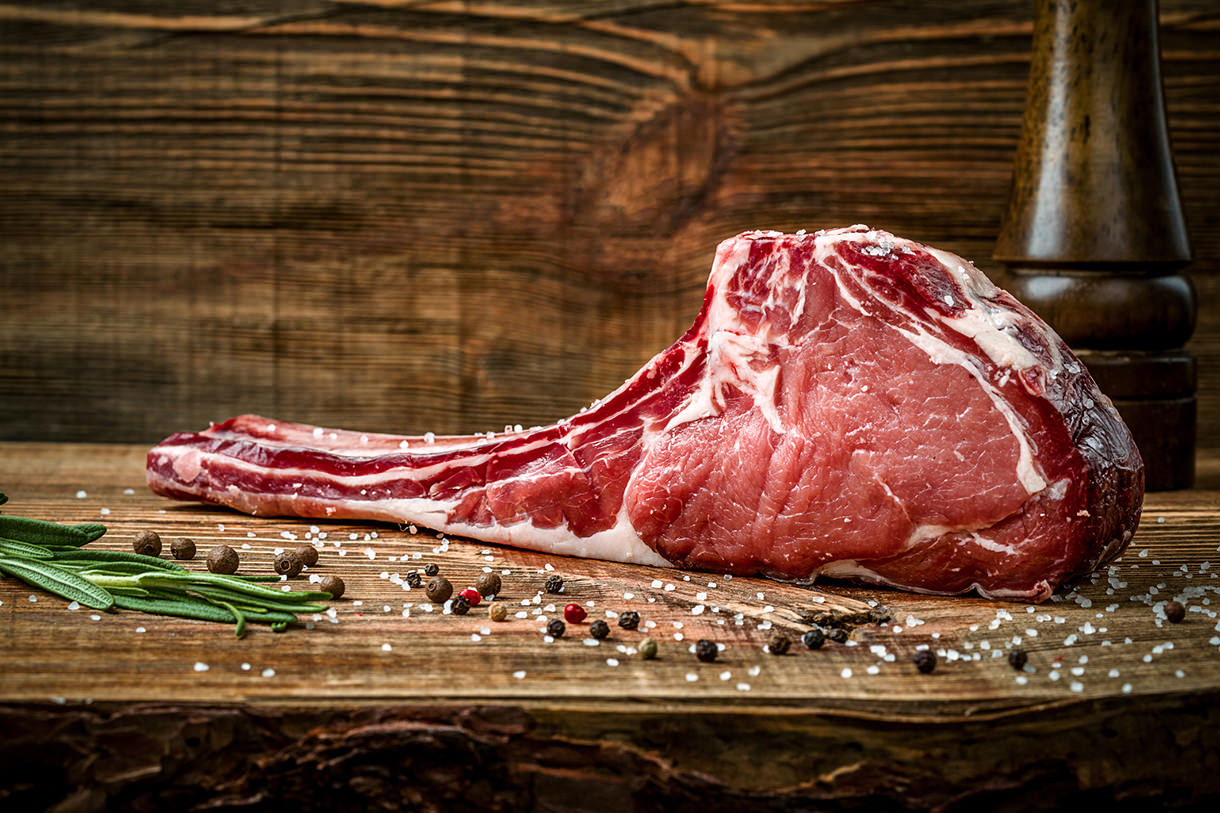 When Dan Honig first visited Rising Spring Meat Company,  a small-scale USDA certified slaughter and processing facility in the heart of Penns Valley, he reached into his pocket and preemptively took out his cell phone. He was used to being asked for it by suspecting slaughterhouse owners who didn’t want photos of their operations surfacing in the news.

“Why would we need your cell?” Rising Spring co-owner Jay Young asked. He had nothing to hide, and welcomed interested partners into the facility.

It was a good sign for Honig, who was in the early stages of starting a business that would connect chefs at New York restaurants with the meat from small, humane farms. A “mostly” vegetarian who alighted in the sustainable meat industry, first in sales and later at a butcher shop, Honig’s professional journey has brought him closer to a food system that, as a child, had been a mystery.

“We didn’t talk about food [growing up],” he said. At some point, however, “it was like the wool had been pulled over my eyes. I realized it sucked to be an animal and farmer in the current climate.”

Honig gave up eating meat—then sought a career in the industry. Rather than trying to convince the rest of the world to become vegan, he wanted to align himself with small farmers who believed in the humane treatment of animals up until, as industry parlance goes, their “one bad day.”

For his next gig, Honig needed a processing facility he could trust to do the job well, one that was flexible enough to cater to the needs of high-end chefs and transparent enough to be part of a story Honig could take to his chefs. “That was unique to Rising Spring,” Honig said.

Back in Brooklyn, not long after Honig’s pivotal trip to central Pennsylvania, he walked into one of his first sales meetings and realized he didn’t have a name for his company. Honig had just purchased his first animal, which was raised by central PA farmer Wade Wolfe and slaughtered by Rising Spring.

Honig could eat this meat. He could proudly tell the chefs he was cultivating as customers who had slaughtered and packed it. He could trace the animal to its farm in central PA. As he brainstormed a name for the business, he took stock of its most important assets—the farms in a fertile valley four hours west on Rt. 80. In 2013 Happy Valley Meat Company was born. 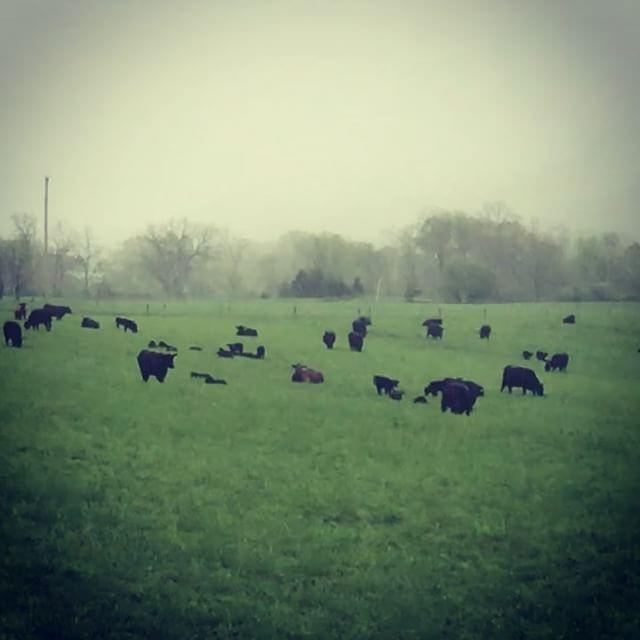 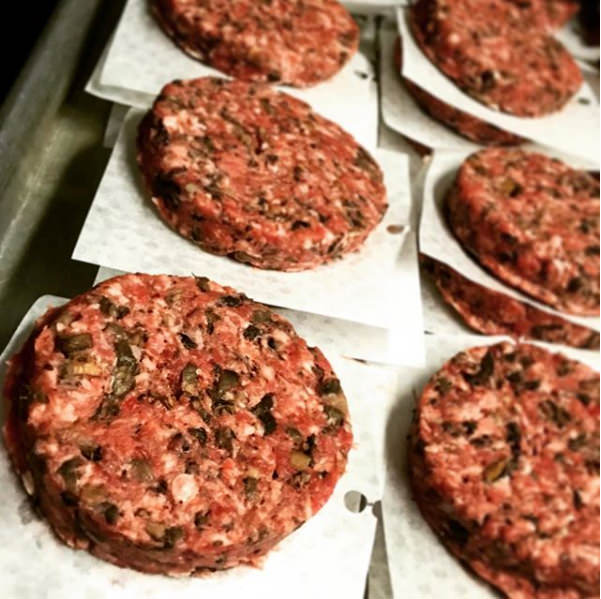 The impact on its namesake is significant. “Happy Valley Meat is writing checks to the tune of about a million [dollars] a year to our farmers,” says Rising Spring’s Young.

And their meat is landing in the kitchens of some of the country’s finest restaurants. Earlier this summer Rising Spring shipped five bone-in tenderloins to one of Honig’s most well-known customers: the storied Delmonico’s Restaurant. “Yes, that Delmonico’s,” Young crowed on Instagram.

The list of restaurants sourcing from Happy Valley Meat has grown to 120. (It now works with two additional processors who meet the same standards as Rising Spring.) Most of its customers are restaurants in New York and New Jersey, although some come from Connecticut, Washington, D.C., Virginia and Pennsylvania—even central Pennsylvania, including The Deli and EcoVents, a catering and event planning company based in Millheim’s Bremen Town Ballroom. (See sidebar for a complete list of PA restaurants that source from Happy Valley Meat.)

Happy Valley Meat and Rising Spring grew up together. In the early days of the company, as Honig worked to keep supply steady, he made the four-hour trek from Brooklyn to Penns Valley weekly, sleeping at Jay and his wife, Laura’s, home. When one of Rising Spring’s employees suffered a shattered spine after he was kicked in the neck by an animal, Honig stayed for a month helping out in various jobs, including working on the kill floor. At one point during that stint, his hands started tingling from fatigue. “That’s a day’s worth of work, boy,” a Rising Spring employee noted after Honig asked what was happening. “You’ve finally done one.”

This grueling, not-for-the-faint-of-heart labor is something most eaters, even carnivores, would rather not consider. Yet, when performed by a responsible company that’s acting in the best interest of the farmers, the animals, its employees and the consumer, it’s a vital, trustworthy link between the farm and your plate.

By working with Rising Spring, Happy Valley Meat (a B Corp) also benefits from the relationships Jay and Laura have built with the small farms in our community. In the circles Jay and Laura Young work and travel in, buying meat from your neighbors is just part of living in a healthy local economy and, in the same way you buy your milk at Meyer Dairy or your drills at retailer-owned co-op Ace Hardware, supporting the businesses in your own backyard. That support extends to a price tag that’s commensurate to the work involved in making that product. “For some reason, food and farming is something that people have expected to get for as little as possible,” Young says. “If farmers charged for their time, no one could afford food.”

Wal-Mart and countless other stores selling cheaper options make it all too easy to forget that your grocery purchase came from an animal. Its story—where that animal came from, how it was raised, where it was slaughtered—disappears with the air that’s removed in the vacuum packaging. 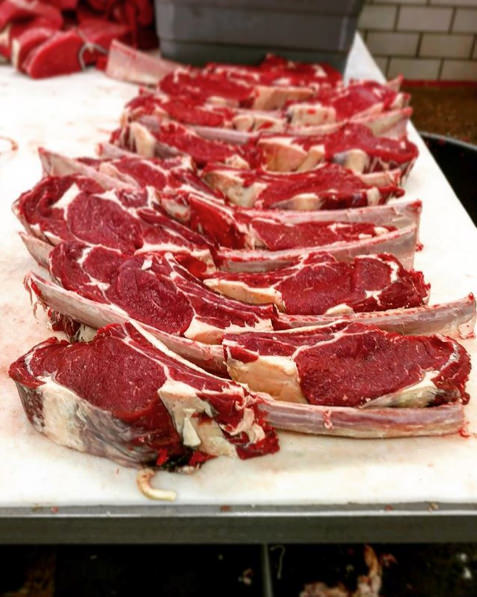 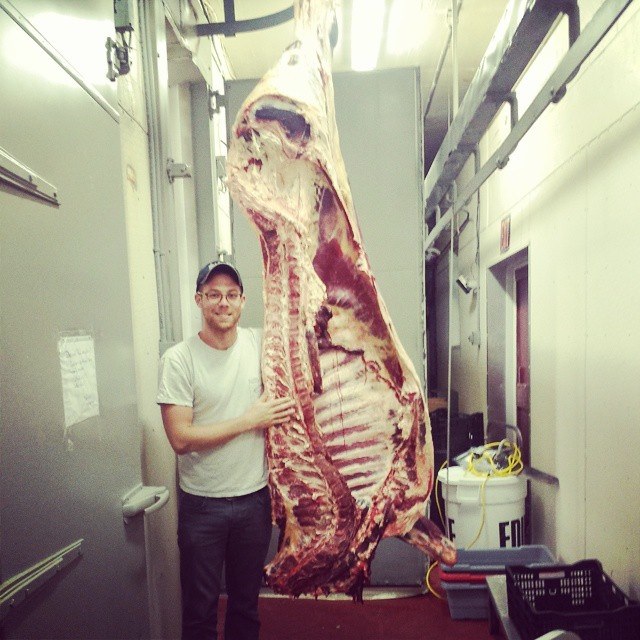 Dan Honig of Happy Valley Meat makes frequent trips to Rising Spring—his gateway to our agricultural paradise, along with delicious meat.
Honig makes monthly field trips with chefs interested in a decidedly different food system: one that tracks an animal’s journey from the pasture to their plates. They leave at 6 a.m., starting their morning on a central PA farm and ending with a trip to the slaughterhouse. It’s an intimate glimpse into the process that transforms farm animals into a $50 ribeye finished with demi-glace and garnished with a sprig of thyme.

Or a relatively inexpensive mushroom burger. In a partnership with To-Jo Mushrooms, a fourth generation family-owned and operated mushroom farm in Avondale, Pennsylvania, Happy Valley Meat is rolling out a new product: the beef-mushroom blended burger, which replaces a quarter of its beef with mushrooms. The newfangled burgers are distributed through the Common Market, a Philly-based distributor with a focus to bring local foods to institutions.

The addition of mushrooms brings Happy Valley Meat’s price down, making a burger made with small-farm meat more accessible for schools, hospitals and other institutions. It also makes something pedestrian—ground beef formed into a patty—new and exciting.

The beef-mushroom burger appealed to Rising Spring, even though it adds another layer of complexity to its process. One animal purchased by Happy Valley Meat yields more than 300 pounds of trim, the parts of the animal that are left over once the ribeyes, strips, filets and other prized cuts are removed. The stuff is harder to sell—chefs and buyers can make just so many burgers, pots of Bolognese and meatloaf casseroles.

If Happy Valley Meat can expand its customer base by blending mushrooms with that trim, it can buy more animals and send more money back to farmers in central PA.  Increased demand allows those farmers to, say, fix a tractor or buy a heifer, investments that strengthen the local food economy. And that’s the ultimate goal for Young.

As for the local food consumer, that mushroom burger could be coming to a restaurant or farmers market near you one day. In the meantime, the next time you venture to New York for dinner, ask the chef where her meat comes from. Don’t be surprised if it’s a small farm in central PA. 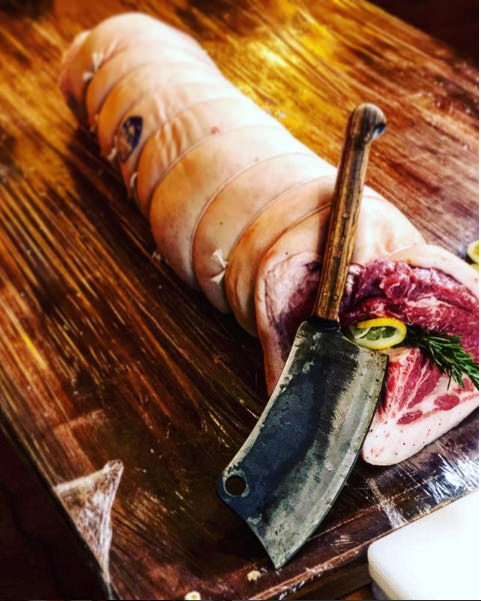 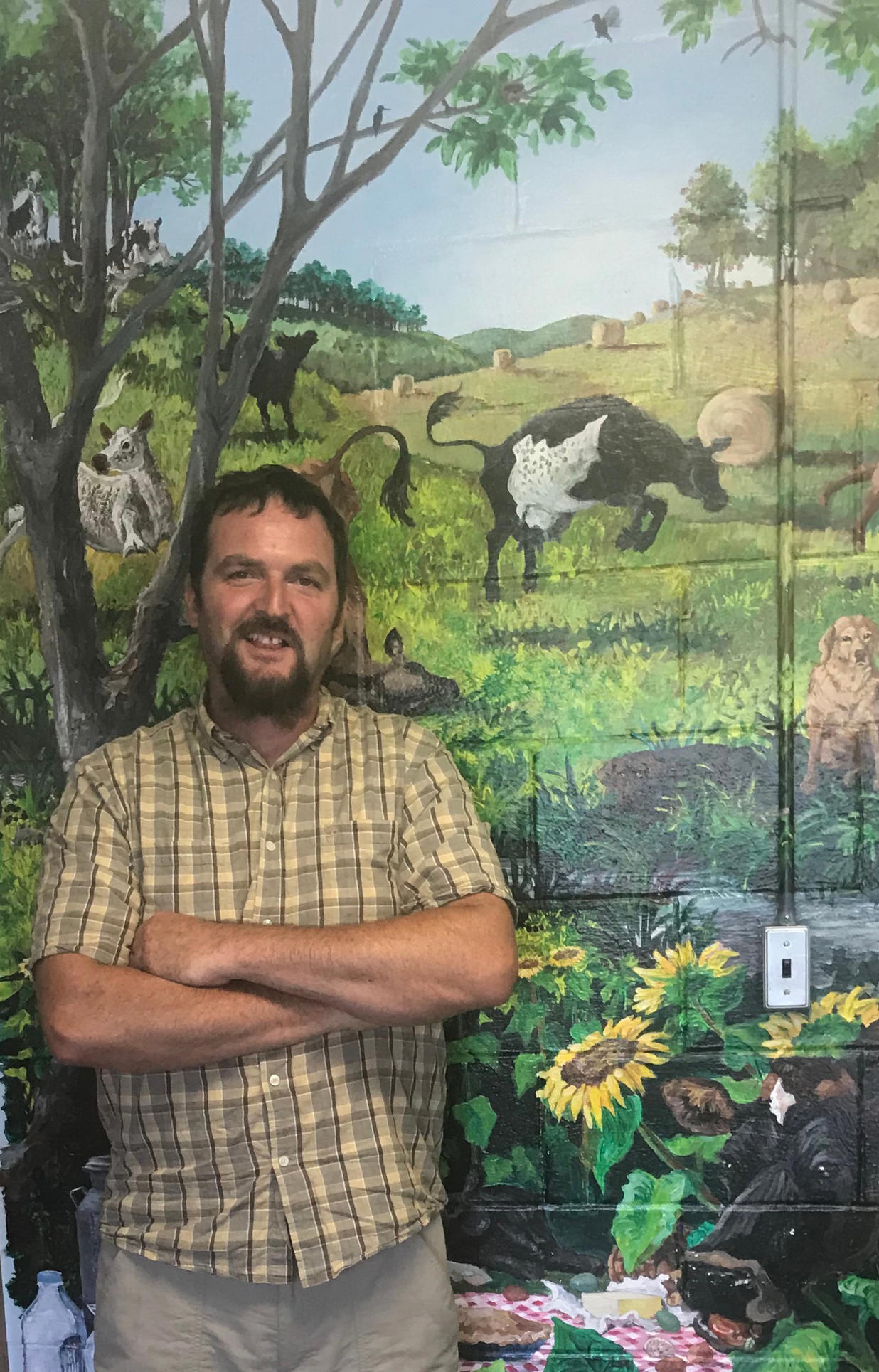 Jay Young loves to talk about local food almost as much as he likes to eat it.

We asked Young, co-owner of Rising Spring Meat Company, for the three things he wishes consumers understood about his corner of the local food economy.

1.“You don’t need to buy meat from outside our economy. All your meat needs can be met right here in central PA. The nuance here is that it probably can’t be done on the cheap. We simply can’t compete with the big houses that have made meat very inexpensive.”

2. “What you ask for has consequences for the local farmer. Labels like ‘free-range,’ ‘grass-fed,’ ‘antibiotic-free’ and ‘organic’ are desirable, but come with inefficiencies. For example, grass-fed means slower growth rates, while antibiotic-free means increased chance for disease. Those requests are the exact opposite of the primary demand: inexpensive, affordable and consistently available food. We want agriculture to serve our inefficient needs inexpensively and it doesn’t work. For the system to work, the customer needs to understand the relationship they are in with the farmer and commit to it in the same way the farmer does: with long-term investment.

“Far more important than any certification is finding a farmer who you would trust to act as you would act. That’s what we have in the farmers all around central PA and among the farmers Rising Spring works with. For example, a ‘never-ever’ approach to antibiotics means that if an animal becomes ill, you either put it down or let it suffer. In the way that you would not let your child suffer through an earache, the reasonable farmer is not going to let his animal suffer through pneumonia.”

3. ”The cost your farmer or local slaughterhouse incurs just to open the doors in the morning is exorbitant. People look at farmers as aw-shucks, fingers-in-their-suspenders kind of people. But if you ever wanted to find someone who knows something about business, find a farmer who has been doing this for a good amount of time—someone who had paid the taxes and mortgage for about 30 years. That’s a pretty fascinating person.” 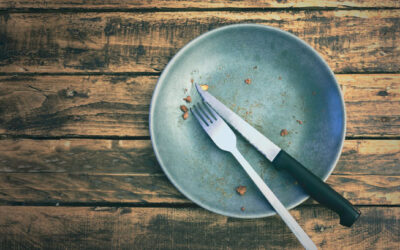 A Year-End Letter from the Editor 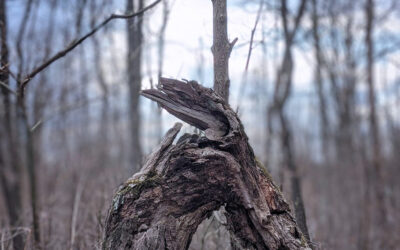 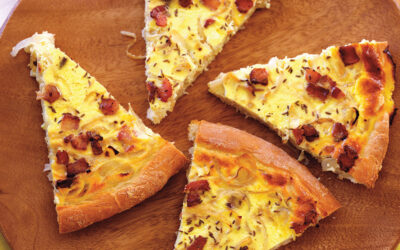 hat’s the most quintessential Pennsylvania food? If you answered soft pretzels, or scrapple, or cheese steak, you’re certainly not wrong. But Carrie Havranek, author of Tasting Pennsylvania, insists that there’s much more on the table across the...